A TEAM of Palestinian children will play football in Ireland next summer, thanks to an initiative to be launched next Wednesday by former Irish manager and leading football pundit Brian Kerr.

Ex-rugby international Trevor Hogan, one of the organisers of the visit, will also speak at the launch.

Under-14 members of the Al-Helal club, based in northern Gaza, will play against teams from Dublin, Tipperary, Limerick and Belfast during their visit next August.

The trip – which will see the children make a daunting journey across Egypt’s Sinai Desert, because the simpler route through Israel is closed by the siege – is being organised by Gaza Action Ireland and Antrim to Gaza, who need to raise thousands of euro to support the initiative.

Al-Helal’s clubhouse was damaged in the Israeli assaults of 2012 and 2014. With the nearby sea polluted by sewage, football is often the only exercise and entertainment available to Gaza’s children, who have just lived through the third major attack in less than six years on the territory where they live.

The organisers are pleased to have the support of many Irish sportspeople, including Kerr, who also serves as a director of SARI (Sport Against Racism Ireland). 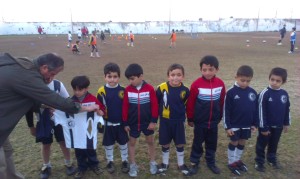